Albert Pujols started off the July 1, 2018 game between the Angels and the Orioles with a single in the first inning, driving home Kole Calhoun for the first run of the game. When Pujols came up to bat again in the top of the fourth inning, the Angles still held that 1-0 lead. Kevin Gausman threw this ball for a first-pitch fastball that Pujols blasted to left field, 346 feet from home plate. This hit was a single, and this baseball was taken out of play. Andrelton Simmons stepped into the batter’s box next, and grounded into a double play, sending both himself and Pujols back to the dugout. In the home half of the fourth inning, the Orioles bats woke up, as 6 men crossed home plate. Baltimore scored two more runs in the fifth, and the Angles got one back in the eighth, but that was all as the Orioles were victorious 8-2. With his hits in this game, Albert Pujols now had 3,046 career hits. This loss dropped the Angles to 43-42 and leaves them in fourth place in their division. 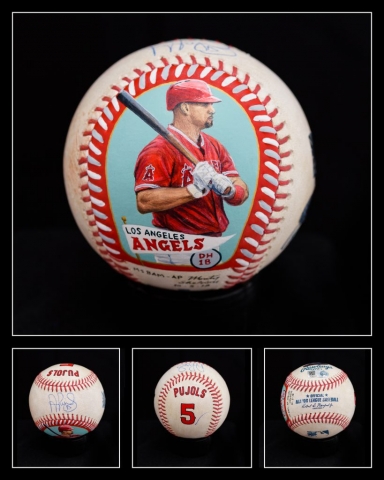