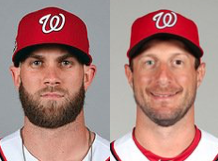 The Washington Nationals welcomed the Texas Rangers to the Washington DC for a game on June 11, 2017. The baseball was used in the bottom of the first inning when Bryce Harper hit a ground ball through the infield, and to right fielder Shin-Soo Choo. Bryce Harper did not remain on the bases for long as the next batter, Daniel Murphy grounded into a double play. This was the only hit for Bryce Harper in the game. Max Scherzer, the reigning Cy Young winner was pitching for the Nationals. In the fourth inning, Scherzer struck out Nomar Mazara in this game for his 2000th career strikeout. The game remained tied 1-1 until the top of the seventh inning when the Rangers scored four runs to take a 5-4 lead which was the final score. Max Scherzer was charged with the loss, and the Nationals had a record of 38-24, good enough for first place in the NL East.