The red hot New York Yankees played the Baltimore Orioles on June 2, 2018. Giancarlo Stanton had been on a cold streak coming into the game when he smashed a home run into the stands in the top of the third inning to make the score 4-1. Stanton continued to heat up in the sixth inning when he led off, and this baseball was brought into play. The count was 2-1 when he hit a fastball up the middle to shortstop Manny Machado. Stanton reached base safely for a single, his second hit of the day. With a new baseball in hand, Kevin Gausman threw a fastball to Gary Sanchez for the first pitch of the at-bat. Sanchez hit a ball that had double play potential written all over it. Machado fielded the ball and threw to Jonathan Schoop at second base to get Stanton on the force out. But Schoop made a throwing error trying to get the second out, which allowed Sanchez to advance to second base. Didi Gregorius then singled Sanchez home to make the score 5-2 in the next at-bat. The Yankees added one more run in the inning which Baltimore answered with two runs of their own in the bottom of the sixth. The two teams continued to battle, but the Yankees would prevail 8-5. This win gave the Yankees a record of 37-18, which was the second best record in all of baseball. But they still trailed their division rivals, the Red Sox by one game in the standings. 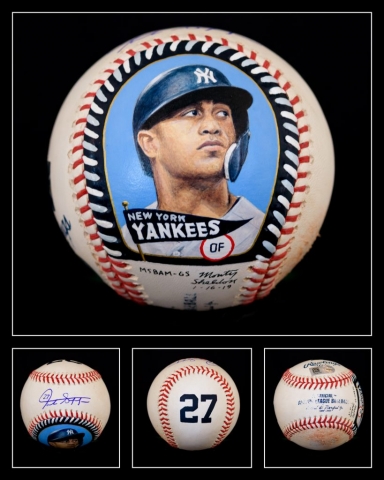