When the Giants traveled to Miami to play the Marlins on August 15, 2017, Giancarlo Stanton had the hottest bat in baseball, having hit a homerun in each of his previous five games. In the bottom of the third inning, Stanton made it six home runs in six games. In the top of the sixth inning, the Marlins were ahead 4-3. Jarrett Parker led off with a single. Buster Posey was next to bat. He saw this ball as a 90.5 MPH fastball, which was driven to left field for a single. Jarrett Parker advanced to second base. Still using this same baseball, Odrisamer Despaigne threw Pablo Sandoval a first-pitch fastball that was hit foul, causing this ball to be taken out of the game. Three pitches later, Sandoval popped out to the shortstop. The next two San Francisco batters were unable to do any better as Brandon Crawford struck out, and Ryder Jones grounded out for the third out of the inning. But he Giants kept battling, scoring runs in the seventh, eighth and ninth inning. When the final out was recorded, San Francisco won 9-4. But even with this win, the Giants had a record of 48-73 which put them in last place in their division and only 3 games ahead of Philadelphia for the worst record in baseball. 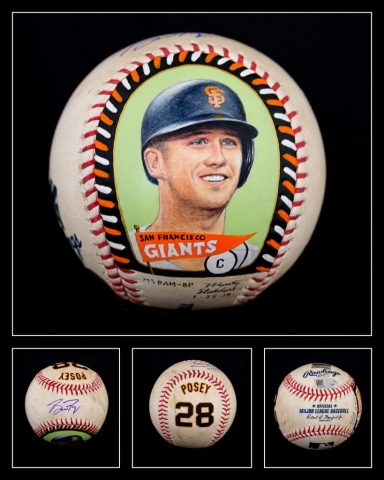