History was made in the second inning of opening day, March 29, 2018 game between the Angels and the Athletics. Batting Eighth, Shohei Ohtani made his major league debut as the designated hitter for the Angels. It took one pitch for him to live up to the hype when he hit a 91.5 MPH cutter from Kendall Graveman into right field for a single. This was the first career hit in the Major Leagues for Ohtani. This was the start of a season that saw the Ohtani go on to hit 22 home runs, and pitch 51.2 innings. The last time a player had more than 15 home runs and 50 innings pitched in the same season were Babe Ruth in 1919. This was the only hit of the game of Ohtani, who went 1 for 5. Meanwhile, the Athletics and Angels battled for 11 innings until Marcus Semien hit a single with runners in on the corners to give Oakland a walk-off win. This baseball was used in the bottom of the sixth inning for the first five pitches of Boog Powell’s at-bat against Blake Wood. The ball was thrown for a ball, two called strikes, another ball, and then was hit foul on a 95.3 MPH pitch, to take this ball out of the game. This foul ball was the first of five consecutive foul balls in the at-bat which took eleven total pitches for Boog Powell to strike out.

• Signed by Los Angeles Angels as free agent in 2017 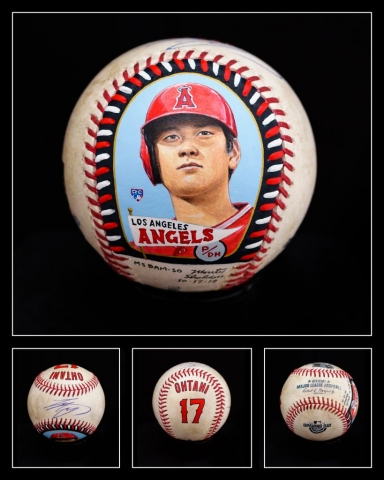