The Dodgers and the Padres met on Monday evening, September 8, 2014, in a game with Clayton Kershaw getting the start for the Dodgers. Kershaw pitched 8.0 solid innings on the way to a Dodger’s victory. In the sixth inning, Kershaw was cruising with an 8-1 lead when Rene Rivera came up to bat with runners on first and second. This ball was used early in the at-bat and was a foul tip that was taken out of play. This at-bat continued and appeared to be a routine short fly ball when Rene Rivera popped out to Yasiel Puig in center field. Puig tried to double up Rymer Liriano at first as he was returning to the bag. However, Puig's throw was wide for an error. Dodgers catcher A.J. Ellis recovered the ball and attempted to throw Liriano out again as he was running to second, but the throw was off the mark for the second error of the play. Hanley Ramirez recovered the wild throw and seeing Yangervis Solarte breaking for home, threw a wild throw to the plate. Not wanting to be outdone by the previous players to field the ball, this throw home was also wide for the third error of the play, as the ball bounced to the backstop. Ellis recovered the ball at the backstop and threw it to Kershaw who was covering home plate, but the throw was not in time, as Liriano scored the second run of this at-bat. Other than this play, the Dodgers played a strong game. Kershaw finished the game after pitching eight innings, allowing only three hits, three runs, two walks, and eight strike outs. This was another gem that Kershaw and the Dodgers won to improve the team record to 82-62, and a 3.5 game division lead. Kershaw improved his record to 18-3 on his way to the 2014 NL Cy Young Award and NL MVP. 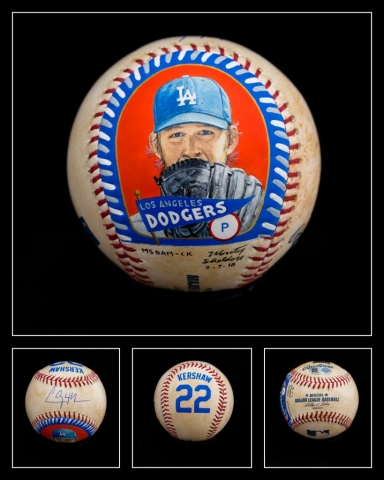