After splitting the first two games, the Phillies and the Diamondbacks played the third game of a three-game series at Citizens Bank Park on April 26, 2018. In the bottom of the second inning, Rhys Hoskins led off and hit this ball deep to centerfield for a double, the 68th hit of his career. The ball remained in the game for two more pitches, until Aaron Altherr fouled the ball and it was replaced. Andrew Knapp struck out and Maikel Franco lined out to end the inning, stranding Hoskins at second base. Arizona had not lost a series yet this season, and they came on strong in the third inning, scoring five runs, to take an 8-0 lead. The Phillies were able to get back two of those runs, but ultimately lost, 8-2 to drop to 15-9, as the Diamondbacks won their eighth series to start the 2018 season. The loss left the Phillies in second place, a half-game behind the New York Mets. 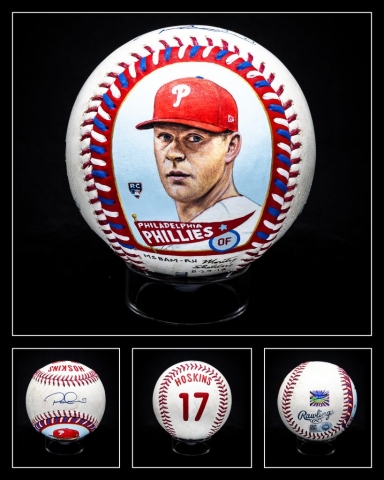