When the Phillies played the Marlins in Philadelphia on September 13, 2017, Rhys Hoskins continued to make a splash in the National League. After a tear through August that ended with him winning the National League Rookie of the Month, he entered this game batting third. In the top of the first inning, Hoskins got the Phillies on the scoreboard first when he drove home Odubel Herrera with a sacrifice fly to left field. In the fifth inning, with Freddy Galvis on base, Hoskins hit his 17th home run of the year to left field to give the Phillies a 5-1 lead. Hoskins provided more offense in the sixth inning when he hit a single to move Freddy Galvis into scoring position, where Nick Williams batted Galvis home on the next at-bat. Hoskins finished the game batting 2 for 2 with a home run, the single, and three RBIs. The Phillies went on to win this game 8-1. This baseball was used in the eighth inning when Giancarlo Stanton grounded on a ball to Freddy Galvis who threw over to Rhys Hoskins at first base. 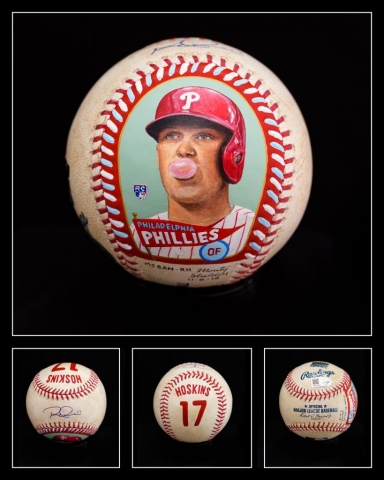