One day after Miami Marlins pitcher Edinson Volquez threw a no-hitter against the Arizona Diamondbacks, the teams met again on June 4, 2017. Not wanting to see a similar result, the Diamondbacks came out swinging in the top of the first inning. Daniel Descalso led off the game by hitting the third pitch he saw to centerfield for a double. Chris Herrmann moved him over to third base on a pop out to left fielder Marcell Ozuna. This baseball entered the game when Paul Goldschmidt batted third. Goldy hit a line drive to left field that dropped for a single and drove home Descalso for the first run of the game, and the 551st RBI of his career. The ball stayed in the game for one more pitch, an 87.8 cutter to Jake Lamb that was fouled off. Lamb struck out, as did Chris Owings to end the inning. Later, in the fourth inning, Goldschmidt again came up to the plate with a runner on base. He hit a ball to deep center field that just barely missed clearing the fence, and ended up as an RBI double to put the Diamondback ahead 5-4. That would be the last run scored by Arizona, while Miami scored two more to win the game 6-5. The loss lowered the Diamondbacks record to 34-25 and left them in third place in a tight NL West, 2.0 games behind the Rockies for first place. 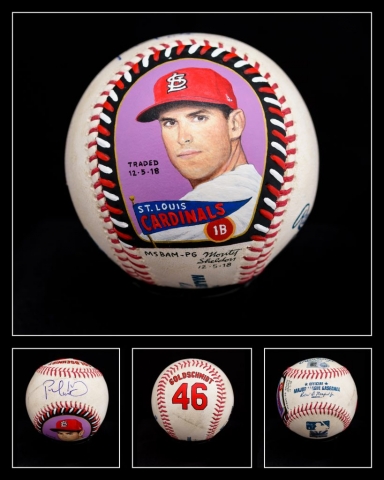