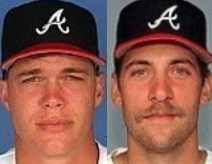 The Mets and Braves met for a doubleheader on September 8, 2011. In the first game of the doubleheader, Chipper Jones had the first hit of the game when this ball was being used. Chris Schwinden threw a 90.2 MPH fastball to Jones, who hit it to left fielder Jason Bay for a double. This double was the 2598th hit for Jones in his career. Dan Uggla was next to bat. He grounded into a force out to advance Chipper Jones to third base while Brian McCann was thrown out at second base. With runners on the corners, Freddie Freeman hit a double as the next batter which scored Jones and Uggla, giving the Braves an early 2-0 lead. Freeman would later score when Martin Prado hit a single, and the Braves led 3-0 before the Mets had a chance to pick up a bat. But New York fought back with four runs in the bottom of the inning and remained ahead 4-3 when Chipper Jones batted in the third inning. Chipper tied the game with his second hit of the game, a solo home run. Atlanta never surrendered the lead and went on to win this game 6-5. Later on in the day, the Braves beat the Mets a second time, 5-1 to sweep the doubleheader, and finish the day with an 84-60 record.