The Red Sox had won the first two games of a three-game series in Kansas City when the Royals and Red Sox played on July 8, 2018. With no score in the top of the second inning, this baseball saw a lit of playing time. First, Xander Bogaerts led off the inning seeing the baseball for a first-pitch ball, before hitting a fastball into right field for a single. Rafael Devers stepped into the batter’s box next, and after two unsuccessful pickoff attempts, hit a single of his own on the first throw to come towards home plate. The Devers single was the 145th hit of his career. This baseball stayed in the game after two singles for a third batter. Eduardo Nunez swung at a first-pitch slider and hit into a double play, with both the batter and Rafael Devers being thrown out. When Sandy Leon at bat next, this baseball remained in the game for a fourth batter, but only for the first pitch when it was delivered in the dirt, at the point this ball was replaced. Sandy Leon would ground out to end the inning, with this ball having seen action with each batter in the top of the second inning. The Red Sox went on to complete the three-game sweep, winning 7-4. The win kept them 2.0 game ahead of the Yankees. 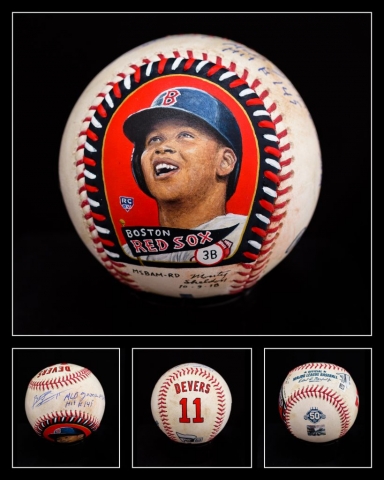