The Astros hosted the Rangers in a matchup between the two top teams in Texas on May 3, 2017. Carlos Correa’s bat was hot, with a solo home run in the second inning and a double in the third inning. In the bottom of the fifth inning, the baseball entered the game as Correa stepped into the batter’s box. Correa kept the bat on his shoulder for the first four pitches, a called strike followed by three balls. On the fifth pitch of the at-bat, Correa hit a bouncing single to shortstop Elvis Andrus who was unable to make a play at first base, allowing a single, Correa’s third hit of the game, and 290th of his career. Carlos Beltran grounded out as the next batter to end the inning. Correa would hit another single later in the game to finish with four hits, and the Astros won 10-1. This win improved their record to 19-9 which was the best record in all of baseball at the end of the day. 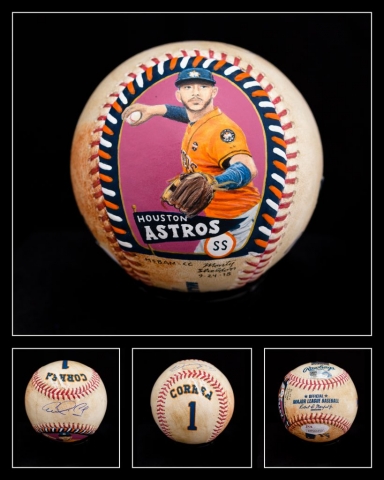