Houston visited the Tigers for an afternoon game Sunday, May 24th, 2015. The Astros took an early 3 run lead in the top of the first inning, scoring two on an Evan Gattis triple, and then Gattis scored and an Anibal Sanchez balk. In the home half of the first inning, Anthony Gose was caught stealing after a walk. Ian Kinsler reached base next on a walk and was moved over to third on a double by Miguel Cabrera. J.D. Martinez scored Kinsler on a sacrifice fly to right field and advanced Cabrera to third. This baseball entered play with the next batter, Yoenis Cespedes. Cespedes hit the pitch, a changeup through the infield to left fielder Colby Rasmus. Miguel Cabrera scored on this hit, the 1190th run scored of Miggy’s career. This was also the 475th career hit for Cespedes. The Cespedes single made the score 3-2. Nick Castellanos followed up with a walk, and then a Rajai Davis single loaded the bases for Bryan Holaday who hit a bases-clearing double to put the Tigers ahead 5-3. Cabrera would later hit a home run in the bottom of the ninth inning, but when the final out was recorded, the Astros were victorious by a score of 10-8. The loss left the Tigers at 26-19, three games behind Kansas City.

• Signed by Florida Marlins as an amateur free agent in 1999 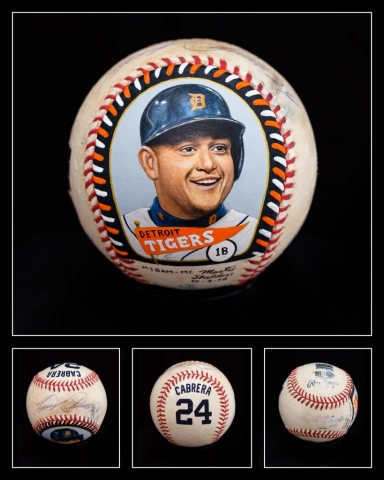