The Chicago White Sox jumped ahead of the Texas Rangers on August 19, 2019. The visiting White Sox scored five runs before the Rangers got a chance to bat. But the home team continued to battle all game long. In the bottom of the third inning, the Rangers scored six runs to take a 7-5 lead. In the fourth, the Rangers extended that lead to 13-1. In the fifth inning, Adrian Beltre batted against Chris Beck with two outs when he launched this baseball into left field for a single, career hit 3022. Beltre moved up to second base when Nomar Mazara hit a ball that was ruled a fielding error before Mike Napoli struck out to end the inning. The Rangers continued to pour on the runs, eventually defeating the White Sox 17-7. The win evened up the Rangers record at 61-61, fourth place in the AL West. 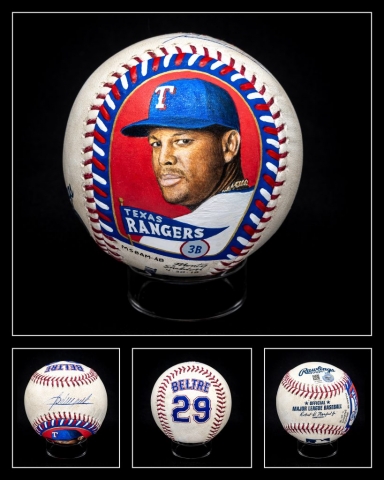