This is a game-used baseball from Adrian Beltre’s 3000th career hit game on July 30, 2017, between the Rangers and the Orioles in Texas. This baseball was used for a Joey Gallo walk in the bottom of the ninth inning. But the day belonged to Adrian Beltre. Entering the game with 2999 career hits, his first at-bat ended with a strikeout. When Beltre came to the plate a second time, in the fourth inning, his teammates lined the railing at the top of the dugout hoping to witness history being made. With Nomar Mazara on first base, Adrian took three consecutive balls from Wade Miley before turning on a 91.3 MPH fastball. The ball went down the line, past Manny Machado, and into left field for a double, becoming the 31st player to reach career hit 3000. Two batters later, Beltre scored on Rougned Odor’s two-run single to bring the Rangers to within two runs of the Orioles, 4-2. Baltimore spoiled the celebration with a 10-6 win. The loss left Texas in third place, 18 games behind the Astros with a 50-54 record. 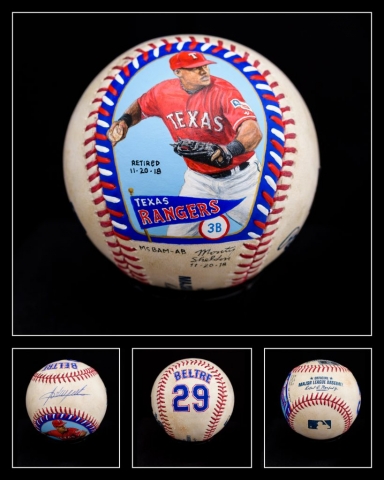