In the first game of a series with first place in the division on the line, the Astros played host to the Angels on April 23, 2018. By the time the eighth inning rolled around, the Angels held a two to none lead. With two outs, this ball was used when George Springer hit a 99.2 MPH pitch to center fielder Mike Trout. However, the ball still had life in it as it remained in play for the next batter, Jose Altuve. Wanting to keep the momentum going, Altuve hit this ball on the first pitch. This time an 85.8 MPH slider traveled 169 feet to centerfielder, Mike Trout. Springer advanced to third base. The ball still remained in play for one more pitch, a breaking ball that Carlos Correa swung at and missed. With runners on the corners, Correa struck out to end the inning. The Angels held on to their 2-0 lead for the win. At the end of the day, the Astros had a record of 16-8 and held a slim half-game lead above the Angels. 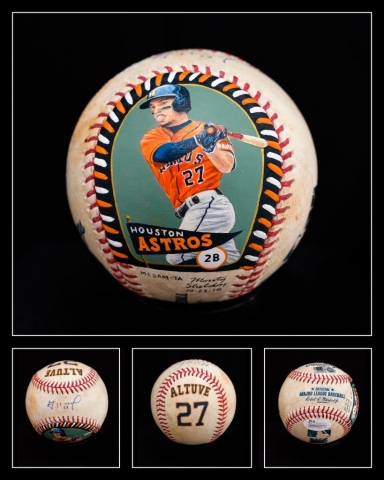