The matchup between the Astros and the Tigers on April 15, 2016, had plenty of base runners, but only one run. The Astros loaded the bases in the first two innings, and had at least one batter reach base in the first five innings, but could not bring them home. However, a Colby Rasmus RBI single, and eight shutout innings from Dallas Keuchel was all the Astros needed to win. This ball was used when Jose Altuve faced Buck Farmer in the bottom of the seventh inning. It was taken out of play after hitting the dirt, and before Jose Altuve grounded out to the pitcher for the second out of the inning. Altuve finished the game 0 for 3 with a walk. Keuchel, on the other hand, was the star of the game, allowing one walk and five hits to go with four strikeouts in the first eight innings. Luke Gregerson shut things down in the ninth inning and Houston improved to 4-7. At the end of the day, the Astros were in fourth place, one and a half games behind the first place Rangers. 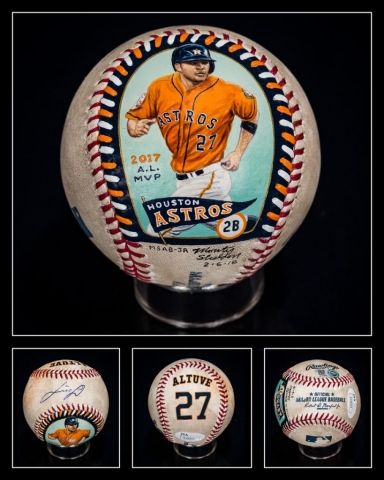