At the start of the 2018 baseball season, Ronald Acuna Jr. was regarded as one of the top prospects in all of baseball. In this game on April 25, 2018, he finally made it to The Show. The Braves battled the Cincinnati Reds all game and were trailing in the top of the eighth inning when Acuna batted with one out. Looking to get collect his first career hit, he took the first two pitches and then fouled off the third from Kevin Shackelford to have a 1-2 count. On the fourth pitch of the at-bat, El Abusador got that first hit, a single to center field. Dansby Swanson singled on the next at-bat, where Acuna demonstrated his speed by racing to third base in only 5.81 seconds. The tying run was now on third base. After a strikeout, Kurt Suzuki hit a single to score Acuna and tie the game at 4. In the top of the ninth inning, the Braves young core demonstrated their ability again as Ozzie Albies reached base on a hit by pitch, followed by a Freddie Freeman single, and then two batters later, Johan Camargo doubled in Albies for the winning run, as Cincinnati was unable to respond in the bottom of the ninth. The win improved the Braves record to 13-10, and Ronald Acuna Jr. completed his first game on his way to a rookie of the year season. This specific baseball was used in the top of the first inning as the fifth pitch to Freddie Freeman when he struck out, all five pitches to Nick Markakis who walked, and the first three pitches to Johan Camargo, until he hit the ball foul. Camargo’s at-bat ended as a strikeout. 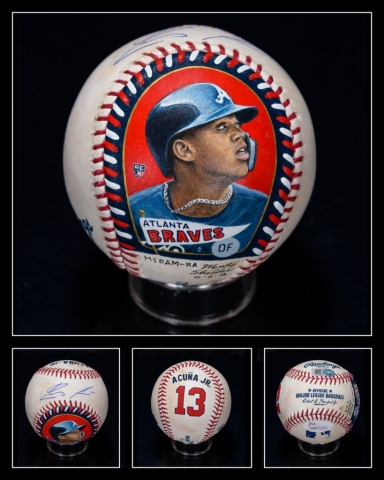