One day after scoring the tying run in his first Major League game, Ronald Acuna Jr. again had an impact on the Atlanta Braves game on April 26, 2018. Acuna finished his second career game with three hits and his first two RBIs. Acuna led off the second inning with a solo home run, hit to the second deck. To give the Braves a 2-0 lead. In the sixth inning, he hit his third career hit, a single to shortstop. The infield single was made possible by Acuna’s speed. He raced from home to first in 4.12 seconds, at a pace of 30.4 feet per second. Following the two hits, El Abusador batted in the eighth inning and hit a bloop double into right field scoring Freddie Freeman and giving the Braves a 5-4 lead over the Reds, The Braves held the lead and added two more runs on their way to a 7-4 win. The win kept Atlanta in the hunt in the NL East, with a 14-10 record as they trailed the Nationals by only 1.5 games. This game used ball saw action in the bottom of the fourth inning when Joey Votto hit a fly ball to left field where it was caught by Acuña for the first out of the inning. This ball stayed in the game for Adam Duvall walk and a Eugenio Suarez foul tip. 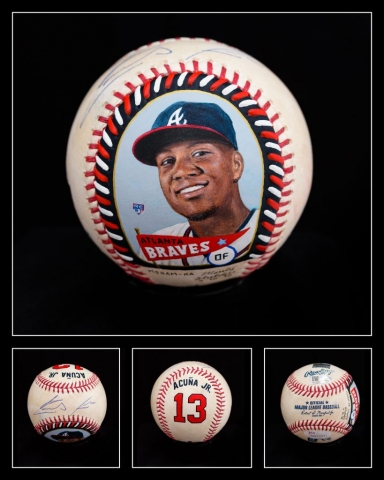