Ozzie Albies and the Braves played the Nationals in Washington on April 10, 2018. To lead off the game, Ender Inciarte hit a fly out to center field. Up next was Ozzie Albies. This baseball was used for the second pitch of the at-bat. Stephen Strasburg threw a 96.0 MPH fastball, and Albies hit it 348 feet into right field for a single. A new ball was brought into the game, and during the next at-bat, Albies was caught trying to steal second base. Stephen Strasburg pitched eight scoreless innings before being taken out of the game, In the top of the ninth, the Nationals held a 4-0 lead. Ozzie Albies started the inning by hitting another ball to right fielder Bryce Harper, this time a double. Freddie Freeman lined out, and Nick Markakis walked. Two batters later, Dansby Swanson hit a sharp double that scored Ozzie Albies. This would be the only Braves run of the game as Ryan Madson sat down the next batter for the third out of the inning. With the loss, Atlanta’s record dropped to 6-5. 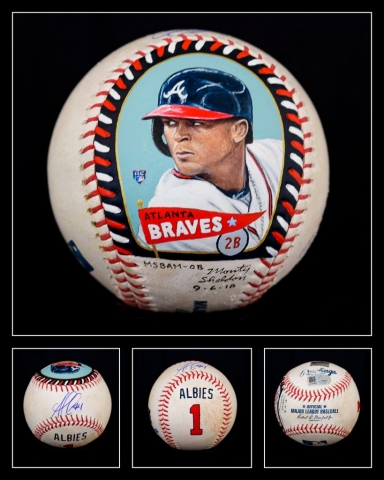